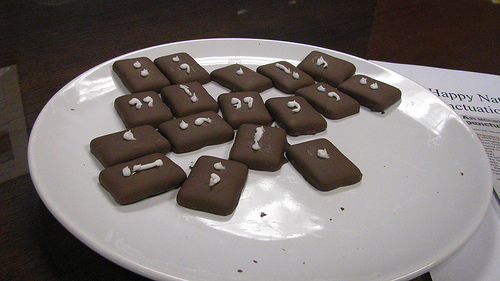 Here are 39 of our best grammar quick tips…

1.  Avoid ending sentences with a preposition (of, with, for, etc.) as long as the flow is natural. If not, then go ahead…it’s OK.

3.  Use a colon to introduce a list or concept that expands upon the statement preceding the colon.

4.  Use commas to indicate a pause or clause. Caution—incorrect comma placement can dramatically change meaning.

7.  When abbreviating a year, use an apostrophe, not an opening single quotation mark: ’99, NOT ‘99.

8.  No commas necessary before an ampersand (&). It’s like using 2 punctuation marks in a row, and very technically wrong.

9.  Use a comma between 2 adjectives if ‘and’ can be placed between them & still make sense. If not, no comma needed.

13.  Do you mix up these adjectives? Discreet (prudence/restraint in speech, behavior) / Discrete (separate, distinct).

14.  A question can be styled as an exclamation: How could I have known!

15.  Do you mix up these nouns? Compliment (expression of praise, respect) / Complement (something that completes/makes whole).

17.  Use a colon after “as follows,” “the following,” and similar expressions, but not after “for example,” or “namely.”

19.  Not sure about colon use? Here’s a trick: the words preceding a colon should always comprise a complete sentence.

20.  Use the singular form of the following:upward, downward, backward, forward, afterward, toward. Add an –s when in Britain.

22.  Eliminate the, that, very, really & other filler words. Your writing will be more concise.

23.  Refer to people as who: The woman who ran a mile…Not, the woman that ran a mile.

25.  Place a comma after Oh or Ah if there is no other punctuation or unless it is part of a phrase: Oh boy! Oh yeah? Ah yes!

26.  A word/phrase following ‘so-called’ doesn’t require quotations unless needed to emphasize only 1 part of the phrase.

27.  A dependent clause preceding a main clause should always be followed by a comma: If you like this tweet, please retweet it.

29.  When a repeated adjective appears before a noun, separate with a comma. Many, many people use Twitter daily.

30. Hyphenate titles of elected officials not yet in office unless title is open compound: president-elect, but vice president elect

32.  “My sister, Sally,” if she is your only sister. “My sister Sally” if you have more than one sister.

33.  Biannual & semiannual mean twice per year. Biennial means once every 2 years (or every other year).

36.  etc. is ALWAYS used to complete a list, is preceded by a comma, followed by a period & ALWAYS lowercase.

37.  In order to & in order for can often be reduced to ‘to’ or ‘for.’ Always best to say the same thing with fewer words.

Affect vs. Effect: A Grammar Goodie For  You